Here it is March and we are still waiting for some sign that spring is going to arrive before the month of June.  This winter has been long, with more than the normal amount of snow as well as colder than normal temps.  What is normal though?  All I know is that we are very sick of shovelling and bundling up to fight the elements!

I guess there is one sign that spring could be thinking about showing her face and that is that the squirrels are looking for places to build new nests.  We have solar panels on the roof of our 100 year old house and have been fighting squirrels ever since we got  them installed.

I guess it is hard for them to resist this cozy spot which gets a lot of warmth from the sun. We are constantly pulling cedar bark from underneath this front corner panel. There is one particular varmint that just won’t listen to reason.  No matter how much we irritate him by banging a metal pole on the eaves trough, or pulling down his newly constructed nest, he insists on starting over again.  Yesterday when the sun was particularly warm we spotted him sunning himself up on the roof peak.  The nerve of him flaunting himself like that as we look on in disbelief.

We are trying to hamper his climb which has been a constant mystery to us.  First we cut off the tall cedar that was growing up beside the house. He was using this as an expressway to the rooftop. I will dig out what’s left of this poor tree in the spring and replant something smaller.

We then discovered he was jumping from the trees at the front of the house onto the hydro lines and onto the roof.  We proceeded to spread axle grease along this wire which works well as a deterrent. If you look closely you can see some hairs from his tail stuck to the line.  He doesn’t use this route anymore. 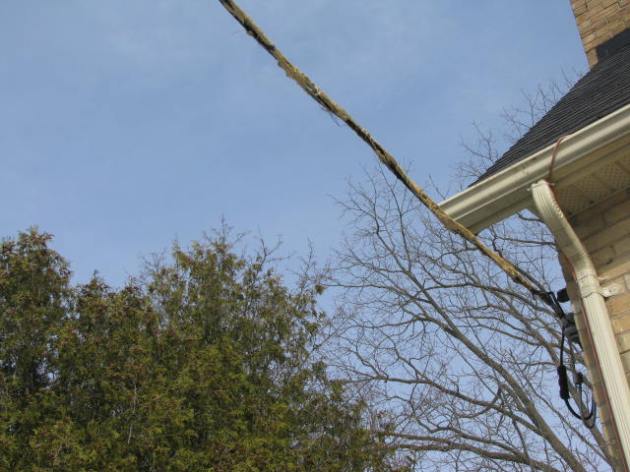 We saw his tracks in the snow leading to the board and batten on the addition. He was climbing up this onto the roof where there was no overhang. We decided to attach metal pieces to the edge which stopped him in his tracks yet again.

It had been a couple of months without any sign of him but then we heard him up there again. He has managed to chew through one of the wires to our solar inverter. This panel will have to be removed from the roof to have the repair done. Now it’s starting to cost us money which got Gerbe’s ire up even more.  Because of the immense pile of snow at the back of the house we thought he was jumping from the snow pile to the coach lights and onto the roof.  Therefore we erected metal over the lights to stop his climb.

As you can see by the following pictures we have been chopping ice and shovelling for the past 4 days trying to get the snow away from the back of the house. 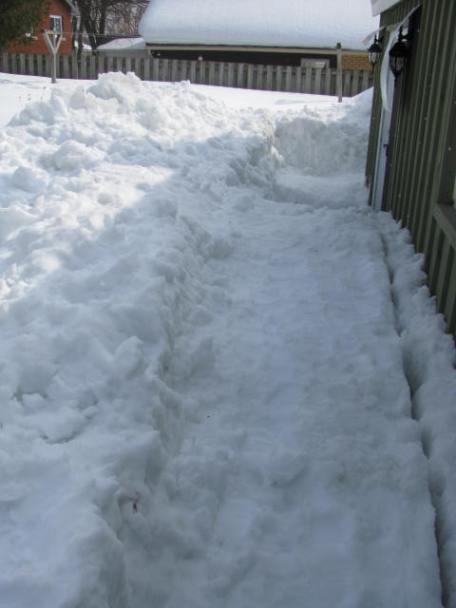 Mr. Squirrel was up there again this morning and we have no idea how he is doing it. We will continue to annoy him and remove the cedar bark that he drags to the roof. It’s a battle of wits and perseverance….let the best man or rodent win!

I enjoy curling up with a good book, I write poetry from the heart, I am passionate about gardening, I am an avid golfer and I love riding on the back of my husband's Harley-Davidson.
View all posts by DohNa →
This entry was posted in Mother Nature. Bookmark the permalink.